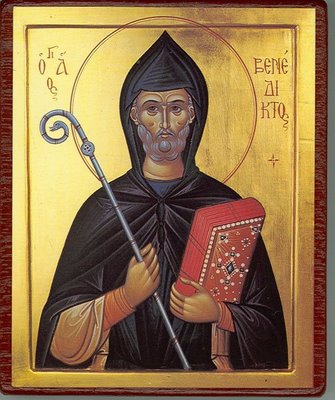 Benedict, abbot and founder of the monastic communities of Subiaco and Monte Cassino, and the author of the monastic Rule that bears his name, is the patriarch of western monasticism. The primary source for our knowledge of his life is Book II of the Dialogues of Gregory the Great. Benedict was born about 480 at Nursia in central Italy and studied at Rome, where the style of life disgusted him. Rome at this time was overrun by various barbarian tribes, and the period was one of considerable political instability (the western Roman Empire had come to an end in the latter half of the fifth century). The old Roman society of the West was breaking down, and the Germanic kingdoms of the early Middle Ages were emerging within the boundaries of the fallen empire. Benedict’s disgust with the manners and morals of Rome led him to leave the city before he completed his studies, and he withdrew to cave above Lake Subiaco, about forty miles west of Rome, where there was already at least one other hermit. After a time disciples joined Benedict, whom he organized into into a dispersed community whose life was probably semi-eremetical in character. He encountered local jealousy which is said to have caused an attempt to be made on his life, and he withdrew around 525 to Monte Cassino, near Naples, where he wrote the final version of his Rule. He does not appear ever to have been ordained or to have contemplated the founding of an “Order” of monks. He died sometime between 540 and 550 and was buried in the same grave as his sister, Scholastica.

Benedict incorporated much traditional monastic teaching from John Cassian, Basil the Great, and the Rule of the Master, but the enactments of these were often considerably modified by Benedict. His outlook was characterized by prudence and moderation realized within a framework of authority, obedience, stability, and community life. His great achievement was to produce a monastic way of life that was complete, orderly, and workable, in which work and prayer were integrated. The monks’ primary occupation was liturgical prayer, complemented by sacred reading and manual work of various kinds. Benedict’s own personality is reflected in his description of what kind of man the abbot should be: wise, discreet, flexible, learned in the law of God, but also a spiritual father to his community.

Both by its intrinsic qualities and by the favor granted it by emperors and other rulers and founders, the Rule came to be recognized as the fundamental monastic code of western Europe in the early Middle Ages. Its flexibility enabled it to be adapted to the needs of society, so that monasteries became centers of learning, agriculture, hospitality, and medicine in a way almost certainly unforeseen even by Benedict himself.

Almighty and everlasting God, your precepts are the wisdom of a loving Father: Give us grace, following the teaching and example of your servant Benedict, to walk with loving and willing hearts in the school of the Lord’s service; let your ears be open to our prayers; and prosper with your blessing the work of our hands; through Jesus Christ our Lord, who lives and reigns with you and the Holy Spirit, one God, for ever and ever. Amen.

The propers for the commemoration of Benedict of Nursia, Abbot of Monte Cassino, are published on the Lectionary page website. 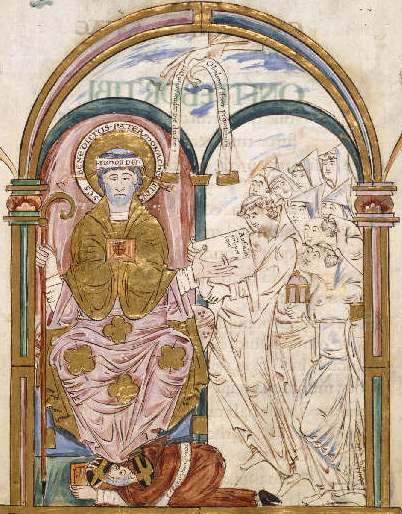