John Wycliffe, Presbyter and Translator of the Bible into English, 1384

John Wycliffe (also Wycliff or Wyclif), born c. 1330, was born in Yorkshire and educated at Oxford University. Fellow of Merton College in 1356 and Master of Balliol College circa 1360-1, he served a rector of Fillingham and later of Ludgershall and of Lutterworth (the latter two until his death in 1384). He was in the service of the Edward, the Black Prince of Wales, and of Edward’s brother, John of Gaunt, the Duke of Lancaster, from 1371, serving as an envoy and propagandist.

Wycliffe made his reputation early as a philosopher. Reacting against the prevailing scepticism of Oxford thought, which divorced natural and supernatural knowledge, he returned to the philosophical realism of Saint Augustine and Robert Grosseteste. From the beginning his philosophy was religious in character, and it was fed by a sense of the spiritual sterility of skepticism. As a theologian he sought inspiration in the Scriptures and the Fathers rather than in the speculations of medieval Scholasticism, and he fulfilled his doctoral obligations at Oxford by an unprecedented, if unoriginal, series of lectures conmmenting on the entire Bible. His growing repugnance for the religious institutions of his time led to his gradual elaboration, on the basis of his philosophy, of a concept of the Church which distinguished its eternal, ideal reality from the visible, “material” Church, and denied to the latter any authority that did not derive from the former. His idea that the clergy, if not in a state of grace, could lawfully be deprived of their endowments by the civil power, its own authority dependent on being in a state of grace (De Civili Dominio, 1375-60), was condemned in 1377 by Pope Gregory XI. In his De Ecclesia, De Veritate Sacrae Scripturae, and De Potestate Papae (1377-8), Wycliffe maintained that the Bible, as the eternal “exemplar” of the Christian religion, was the sole criterion of doctrine, to which no ecclesiastical authority might lawfully add, and that the papal authority was ill-founded in Scripture. In the later De Apostasia he denied, in violent terms, that the religious (monastic) life had any foundation in Scripture, and he appealed to the government to reform the whole order of the Church in England. At the same time in De Eucharistia he attacked the doctrine of transubstantiation as philosophically unsound and as encouraging a superstitious attitude to the Eucharist. Wycliffe’s eucharistic doctrine was that the bread remained, and that Jesus was truly present in the bread, though in a spiritual and not a material manner.

These published doctrines gradually lost him substantial support in Oxford and reduced his following to a small but loyal group of sholars, along with a number of friends at court (he was protected from ecclesiastical censure three times in his later years by Gaunt and by the Black Prince’s widow). His eucharistic doctrine was condemned by the Univerity in 1381, and Wycliffe’s public refusal to comply in his Confessio created a scandal. The Peasants’ Revolt, popularly though erroneously attributed to his teaching – particularly his teaching on authority and grace – magnified the scandal, and a wide range of his teachings and followers (though not Wycliffe himself) were condemned by Archbishop William Courtenay at the Blackfriars Council in 1382. Wycliffe retired to Lutterworth, where he revised his polemics and produced a series of pamphlets attacking his enemies. After his death from a stroke on December 31, 1384, the continued activity of his disciples, who as they gathered strength among the less educated became known as Lollards, led to further condemnations of Wycliffe’s doctrines in 1388, 1397, and finally at the Council of Constance in 1415. In 1428 Wycliffe’s remains were removed from consecrated ground and burned, and the ashes were cast into the River Swift.

Wyliffe’s philosophical influence at Oxford was considerable for at least a generation, though his later influence in England as a whole is less clear. However, his philosophical and theological writings exercised an influence on Czech scholars, especially Jan (or John) Hus, the Bohemian priest and preacher in Prague who was condemned as a heretic by the same Council of Constance as condemned Wycliffe. (Hus was convicted and burned for his heresy.) Many of Wycliffe’s writings survive only in Czech manuscripts.

Outside the field of philosophy Wycliffe’s ideas were not original and can be compared with similar views of contemporary European reformers. His importance lies in his role in propagating his ideas. Wycliffe was an energetic preacher in Latin and in English, as his surviving sermons show. Furthermore, Wycliffe proposed the creation of a new order of Poor Preachers who would preach to the people from an English Bible.

The first English versions of the entire Bible are the two associated with Wycliffe’s work, made by translating the Latin Vulgate between 1380 and 1397. It is unknown what part of the work of translation was done by Wycliffe himself, but Wycliffe certainly inspired the project, including the making of the second version after his death in 1384. Both versions were made by scholars who were his immediate disciples: Nicholas Hereford, largely responsible for the first version; and John Purvey, Wycliffe’s secretary, for the second version, completed in 1397.

The modern-day Wycliffe Bible Translators, named in his honor, are committed to translating the Bible into all languages spoken around the world.

compiled from The Oxford Dictionary of the Christian Church,
and the preface to the New English Bible

O Lord, God of truth, whose Word is a lantern to our feet and a light upon our path: We give you thanks for your servant John Wycliffe, and those who, following in his steps, have labored to render the Holy Scriptures in the language of the people; and we pray that your Holy Spirit may overshadow us as we read the written Word, and that Christ, the living Word, may transform us according to your righteous will; through Jesus Christ our Lord, who lives and reigns with you and the Holy Spirit, one God, now and for ever. Amen.

The image of Wycliffe is taken from the website of St Mary’s Church in Lutterworth and is of a late eighteenth century portrait of Wycliffe that hangs in the church.

The Collect is taken from James Kiefer‘s hagiographical website. 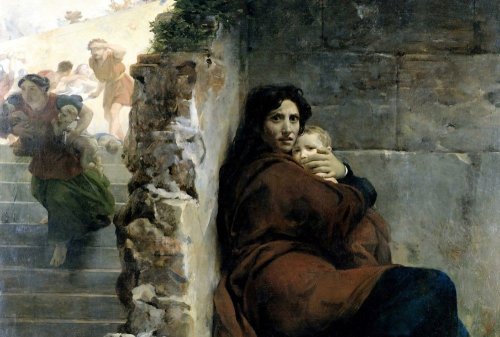 Herod the Great, appointed ruler (ethnarch) of the Jews by the Romans in 40 BC, kept the peace in Palestine for 37 years. His ruthless control, coupled with genuine ability, has been recorded by the Jewish historian Josephus, who describes him as “a man of great barbarity towards everyone.” Though he identified himself publicly as a practicing Jew, Herod was an Idumaean (an Edomite), the son of Antipater the Idumaean, a high-ranking official under the Jewish ethnarch Hyrcanus II, the last legal Hasmonean rule of Judaea, whose daughter Herod married. Because he was not himself a Hasmonean and was not ethnically a Jew, Herod was continually in fear of losing his throne. It is not surprising that the Magi’s report of the birth of an infant King of the Jews (Matthew 2) caused him fear and anger. Although the event is not recorded in other sources, the story of the massacre of the Innocents is completely in keeping with what is known of Herod’s character.

To protect himself against being supplanted by an infant king, Herod ordered the slaughter of all male children under two years of age in Bethlehem and the surrounding region. We do not know how many were killed, but the Church has always honored these innocent children as martyrs. Augustine of Hippo called them, “buds, killed by the frost of persecution the moment they showed themselves.”

adapted from Lesser Feasts and Fasts

Almighty God, out of the mouths of children you manifest your truth, and by the death of the Holy Innocents at the hands of evil tyrants you show your strength in our weakness: We ask you to mortify all that is evil within us, and so strengthen us by your grace, that we may glorify your holy Name by the innocence of our lives and the constancy of our faith even unto death; through Jesus Christ our Lord, who died for us and now lives with you and the Holy Spirit, world without end. Amen.

Thus says the Lord:
“A voice is heard in Ramah,
lamentation and bitter weeping.
Rachel is weeping for her children;
she refuses to be comforted for her children,
because they are no more.”

Then would they have swallowed us up alive, *
when they were so wrathfully displeased with us;

But praised be the LORD, *
who has not given us over to be prey for their teeth.

We escaped like a bird out of the snare of the fowler; *
the snare is broken, and we have been delivered.

Our help is in the Name of the LORD, *
the maker of heaven and earth.

Then I saw a new heaven and a new earth, for the first heaven and the first earth had passed away, and the sea was no more. And I saw the holy city, new Jerusalem, coming down out of heaven from God, prepared as a bride adorned for her husband. And I heard a loud voice from the throne saying, “Behold, the dwelling place of God is with man. He will dwell with them, and they will be his people, and God himself will be with them as their God. He will wipe away every tear from their eyes, and death shall be no more, neither shall there be mourning, nor crying, nor pain anymore, for the former things have passed away.”

And he who was seated on the throne said, “Behold, I am making all things new.” Also he said, “Write this down, for these words are trustworthy and true.” And he said to me, “It is done! I am the Alpha and the Omega, the beginning and the end. To the thirsty I will give from the spring of the water of life without payment. The one who conquers will have this heritage, and I will be his God and he will be my son.

Now when they had departed, behold, an angel of the Lord appeared to Joseph in a dream and said, “Rise, take the child and his mother, and flee to Egypt, and remain there until I tell you, for Herod is about to search for the child, to destroy him.” And he rose and took the child and his mother by night and departed to Egypt and remained there until the death of Herod. This was to fulfill what the Lord had spoken by the prophet, “Out of Egypt I called my son.”

Then Herod, when he saw that he had been tricked by the wise men, became furious, and he sent and killed all the male children in Bethlehem and in all that region who were two years old or under, according to the time that he had ascertained from the wise men. Then was fulfilled what was spoken by the prophet Jeremiah:

“A voice was heard in Ramah,
weeping and loud lamentation,
Rachel weeping for her children;
she refused to be comforted, because they are no more.”

An icon of the Holy Innocents entitled, “The Lament of Rachel“, and the troparion for the day, may be viewed at the “Come and See” Icons website.