Conversion of Saint Paul the Apostle 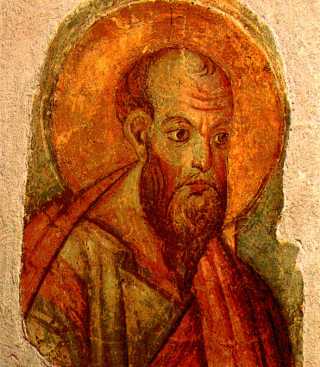 Paul, or Saul as he was known until he became a Christian, was a Roman citizen, born at Tarsus, in present-day Turkey. He was brought up as a devoted Jew, studying in Jerusalem for a time under Gamaliel, the most famous rabbi of the day. Describing himself, he said, “I am an Israelite, a descendant of Abraham, a member of the tribe of Benjamin” (Romans 11:1).

A few years after the death of Jesus, Saul came in contact with the new Christian movement, and became one of the most fanatical of those who were determined to stamp out this “dangerous heresy”. Saul witnessed the stoning of Stephen. He was on the way to Damascus to lead in further persecution of the Christians when his dramatic conversion took place.

From that day, Paul devoted his life completely to Jesus Christ and especially to the conversion of Gentiles. The Acts of the Apostles describes the courage and determination with which he planted Christian congregations over a large area of the land bordering the eastern Mediterranean Sea.

His letters, the earliest of Christian writings, reveal him as the greatest of the interpreters of Christ’s death and resurrection, and as the founder of Christian theology. He writes, “I have been crucified with Christ; it is no longer I who live, but Christ who lives in me; and the life I now live in the flesh I live by faith in the Son of God, who loved me and gave himself for me” (Galatians 2:20). His treatment throughout his letters of a theology in which Jesus Christ is the Messiah, the hope of Israel and the climax and fulfillment of the covenant God made with Abraham and renewed at Sinai, and his breathtaking rewriting of Israel’s central confession that the Lord God is One to include Jesus as that one Lord, is nothing less than brilliant.

Paul describes himself as small and insignificant in appearance: “His letters are weighty and strong,” it was said of him, “but his bodily presence is weak, and his speech is of no account” (2 Corinthians 10:10). He writes of having a disability which he had prayed God to remove from him, and quotes the Lord’s reply, “My grace is sufficient for you, for my power is made perfect in weakness.” Therefore Paul went on to say, “I will all the more gladly boast of my weaknesses, that the power of Christ may rest upon me (2 Corinthians 12:9).

Paul is believed to have been martyred at Rome in the year 64, during the persecution under the emperor Nero. As a Roman citizen, he would have been executed by decapitation.

adapted from Lesser Feasts and Fasts (1980)

O God, by the preaching of your apostle Paul you have caused the light of the Gospel to shine throughout the world: Grant, we pray, that having his wonderful conversion in remembrance, we may show ourselves thankful to you by following his holy teaching; through Jesus Christ our Lord, who lives and reigns with you, in the unity of the Holy Spirit, one God, now and for ever. Amen.

[Paul said to King Agrippa] “I myself was convinced that I ought to do many things in opposing the name of Jesus of Nazareth. And I did so in Jerusalem. I not only locked up many of the saints in prison after receiving authority from the chief priests, but when they were put to death I cast my vote against them. And I punished them often in all the synagogues and tried to make them blaspheme, and in raging fury against them I persecuted them even to foreign cities.

“In this connection I journeyed to Damascus with the authority and commission of the chief priests. At midday, O king, I saw on the way a light from heaven, brighter than the sun, that shone around me and those who journeyed with me. And when we had all fallen to the ground, I heard a voice saying to me in the Hebrew language, ‘Saul, Saul, why are you persecuting me? It is hard for you to kick against the goads.’ And I said, ‘Who are you, Lord?’ And the Lord said, ‘I am Jesus whom you are persecuting. But rise and stand upon your feet, for I have appeared to you for this purpose, to appoint you as a servant and witness to the things in which you have seen me and to those in which I will appear to you, delivering you from your people and from the Gentiles—to whom I am sending you to open their eyes, so that they may turn from darkness to light and from the power of Satan to God, that they may receive forgiveness of sins and a place among those who are sanctified by faith in me.’

“Therefore, O King Agrippa, I was not disobedient to the heavenly vision, but declared first to those in Damascus, then in Jerusalem and throughout all the region of Judea, and also to the Gentiles, that they should repent and turn to God, performing deeds in keeping with their repentance. For this reason the Jews seized me in the temple and tried to kill me.”

Let your way be known upon earth, *
your saving health among all nations.

O let the nations rejoice and be glad, *
for you shall judge the peoples righteously, and govern the nations upon earth.

Then shall the earth bring forth her increase, *
and God, even our own God, shall give us his blessing.

God shall bless us, *
and all the ends of the world shall fear him.

For I would have you know, brothers, that the gospel that was preached by me is not man’s gospel. For I did not receive it from any man, nor was I taught it, but I received it through a revelation of Jesus Christ. For you have heard of my former life in Judaism, how I persecuted the church of God violently and tried to destroy it. And I was advancing in Judaism beyond many of my own age among my people, so extremely zealous was I for the traditions of my fathers. But when he who had set me apart before I was born, and who called me by his grace, was pleased to reveal his Son to me, in order that I might preach him among the Gentiles, I did not immediately consult with anyone; nor did I go up to Jerusalem to those who were apostles before me, but I went away into Arabia, and returned again to Damascus.

Then after three years I went up to Jerusalem to visit Cephas and remained with him fifteen days. But I saw none of the other apostles except James the Lord’s brother. (In what I am writing to you, before God, I do not lie!) Then I went into the regions of Syria and Cilicia. And I was still unknown in person to the churches of Judea that are in Christ. They only were hearing it said, “He who used to persecute us is now preaching the faith he once tried to destroy.” And they glorified God because of me.

[Jesus said to the twelve] “Behold, I am sending you out as sheep in the midst of wolves, so be wise as serpents and innocent as doves. Beware of men, for they will deliver you over to courts and flog you in their synagogues, and you will be dragged before governors and kings for my sake, to bear witness before them and the Gentiles. When they deliver you over, do not be anxious how you are to speak or what you are to say, for what you are to say will be given to you in that hour. For it is not you who speak, but the Spirit of your Father speaking through you. Brother will deliver brother over to death, and the father his child, and children will rise against parents and have them put to death, and you will be hated by all for my name’s sake. But the one who endures to the end will be saved. When they persecute you in one town, flee to the next, for truly, I say to you, you will not have gone through all the towns of Israel before the Son of Man comes.