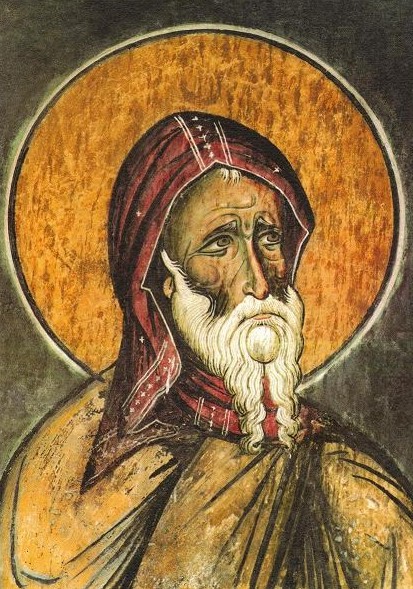 In the third century, many young men turned away from the corrupt and decadent society of the time, and went to live in deserts or mountains, in solitude, fasting, and prayer. Antony of Egypt was an outstanding example of this movement, but he was not merely a recluse. He was a founder of monasticism, and wrote a rule for anchorites.

Antony’s parents were Christians, and he grew up to be quiet, devout, and meditative. When his parents died, he and his younger sister were left to care for a sizable estate. Six months later, in church, he heard the reading about the rich young ruler whom Christ advised to sell all he had and give to the poor. Antony at once gave his land to the villagers, and sold most of his goods, giving the proceeds to the poor. Later, after meditating on Christ’s bidding, “Do not be anxious about tomorrow,” he sold what remained of his possessions, placed his sister in a “house of maidens,” and became an anchorite (solitary ascetic).

Athanasius of Alexandria, who knew Antony personally, writes that he spent his days praying, reading, and doing manual labor. For a time, he was tormented by demons in various guises. He resisted, and the demons fled. Moving to the mountains across the Nile from his village, Antony dwelt along for twenty years. In 305, he left his cave and founded a “monastery”, a series of cells inhabited by ascetics living under his rule. Athanasius writes of such colonies: “Their cells like tents were filled with singing, fasting, praying, and working that they might give alms, and having love and peace with one another.”

Antony visited Alexandria, first in 312, to encourage those suffering martyrdom under the emperor Maximinus; later, in 335, to combat the Arians by preaching, conversions, and the working of miracles. Most of his days were spent on the mountain with his disciple Macarius.

He willed a goat-skin tunic and a cloak to Athanasius, who said of him: “He was like a physician given by God to Egypt. For who met him grieving and did not go away rejoicing? Who came full of anger and was not turned to kindness?…What monk who had grown slack was not strengthened by coming to him? Who came troubled by doubts and failed to gain peace of mind?”

adapted from Lesser Feasts and Fasts (1980)

O God, by your Holy Spirit you enabled your servant Antony to withstand the temptations of the world, the flesh, and the devil: Give us grace, with pure hearts and minds, to follow you, the only God; through Jesus Christ our Lord, who lives and reigns with you and the Holy Spirit, one God, for ever and ever. Amen.

The propers for Antony, Abbot in Egypt, are published on the Lectionary Page website.