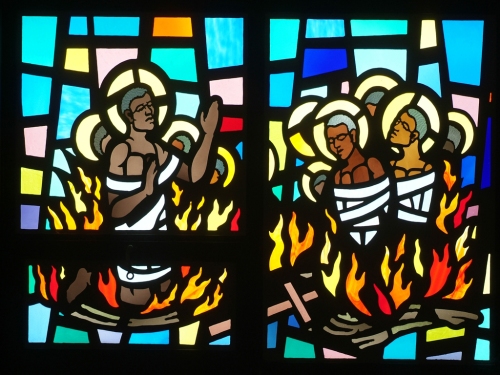 On June 3, 1886, thirty-two young men, pages of the court of King Mwanga the Second of Buganda, were burned to death at Namugongo for their refusal to renounce Christianity and to submit to the king’s sexual advances. In the following months many other Christians throughout the country died by fire or spear for their faith.

These martyrdoms energized the growth of the Christian faith in Uganda. Introduced by a handful of Anglican and Roman Catholic missionaries after 1877, the faith had been preached only to the immediate members of the court on the orders of King Mutesa. His successor, Mwanga, became increasingly angry as he realized that these first converts put loyalty to Christ above the traditional loyalty to the king. Martyrdoms began in 1885 (including Bishop James Hannington and his Companions, whom we commemorate on October 29th). Mwanga first forbade anyone to go near a Christian mission on pain of death, but finding himself unable to cool the ardor of the converts, resolved to wipe out Christianity in his kingdom.

The Namugongo martyrdoms produced a result entirely the opposite of Mwanga’s intentions. The example of these martyrs, who walked to their deaths singing hymns and praying for their enemies, so inspired many of the bystanders that they began to seek instruction from the remaining Christians. Within a few years the original handful of converts had grown many fold and had spread far beyond the court. The martyrs left the indelible impression that the Christian faith was truly African and not simply a white man’s religion. Most of the missionary work in Uganda was carried out by Africans rather than by European missionaries, and the Christian faith spread steadily. Present-day Uganda is one of the most Christian nations in Africa.

Renewed persecution of Christians by a Muslim military dictatorship in the 1970s proved the vitality of the example of the Namugongo martyrs. Among the thousands of new martyrs, both Anglican and Roman Catholic, was Janani Luwum, archbishop of the (Anglican) Church of Uganda, whose courageous ministry and death inspired not only his own people but also Christians around the world. (Janani Luwum is commemorated on February 17th in the sanctoral Calendars of several Anglican Churches.)

taken from Lesser Feasts and Fasts (1980), with amendments

O God, by your providence the blood of the martyrs is the seed of the Church: Grant that we who remember before you the blessed martyrs of Uganda may, like them, be steadfast in our faith in Jesus Christ, to whom they gave obedience, even to death, and by their sacrifice brought forth a plentiful harvest; through Jesus Christ our Lord, who lives and reigns with you and the Holy Spirit, one God, for ever and ever. Amen.

The propers for the commemoration of the Martyrs of Uganda are published on the Lectionary Page website.