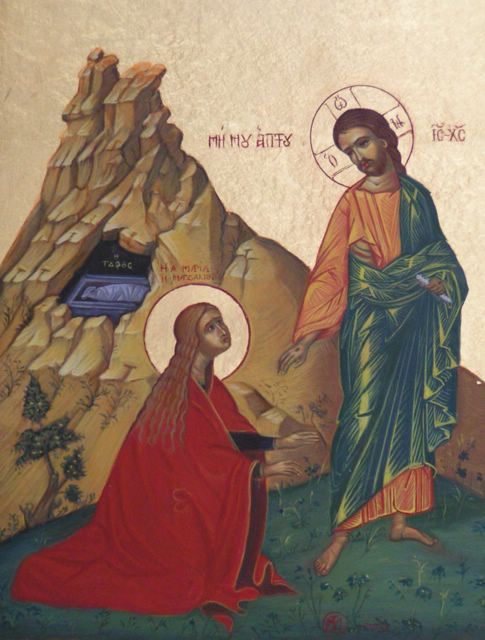 Mary of Magdala near Capernaum was one of several women who followed Jesus and ministered to him in Galilee. The Gospel according to Luke records that Jesus “went on through cities and villages, proclaiming and bringing the good news of the kingdom of God. And the Twelve were with him, and also some women who had been healed of evil spirits and infirmities: Mary, called Magdalene, from whom seven demons had gone out” (Luke 8:1-2). The Gospels tell us that Mary was healed by Jesus, followed him, and was one of those who stood near his cross at Calvary.

Mary Magdalene’s life was changed radically by Jesus’ healing. Her ministry of service and steadfast companionship, even as a witness to the crucifixion, has through the centuries been an example of the faithful ministry of women to Christ. All four Gospels name Mary as one of the women who went to the tomb to mourn and to care of Jesus’ body in burial. Her weeping for the loss of her Lord strikes a common chord with the grief of all others over the death of loved ones. Jesus’ tender response to her grief – meeting her in the garden, revealing himself to her by calling her name – makes her the first witness to the risen Lord. She is given the command, ” go to my brothers and say to them, ‘I am ascending to my Father and your Father, to my God and your God.’” (John 20:17). As the first messenger of the resurrection, she tells the disciples, “I have seen the Lord” (John 20:18).

In the Eastern Churches, Mary is venerated as isapostolos: equal to the Apostles. Eastern tradition holds that Mary went to Ephesus with Mary, the mother of Jesus, and John the Evangelist, and that there she died and was buried. Willibald, the eighth century English monk who traveled widely through the Christian world, saw the traditional site of her tomb. Her feast has been kept in the West since the eighth century, and her popularity in England is reflected in the nearly two hundred ancient dedications of churches and her universal appearance in medieval sanctoral calendars.  The universities of both Oxford and Cambridge have colleges dedicated to her.

taken from Lesser Feasts and Fasts (1980), alt.,
with additions from The Oxford Dictionary of Saints

Almighty God, whose blessed Son restored Mary Magdalene to health of body and of mind, and called her to be a witness of his resurrection: Mercifully grant that by your grace we may be healed from all our infirmities and know you in the power of his unending life; who with you and the Holy Spirit lives and reigns, one God, now and for ever. Amen.

Then Judith fell upon her face and put ashes on her head and uncovered the sackcloth she was wearing; and at the very time when that evening’s incense was being offered in the house of God in Jerusalem, Judith cried out to the Lord with a loud voice and said:

“For your power depends not upon numbers, or your might upon men of strength; for you are God of the lowly, helper of the oppressed, upholder of the weak, protector of the forlorn, Savior of those without hope. Hear, O hear me, God of my father, God the inheritance of Israel, Lord of heavne and earth, Creator of the waters, King of all our creation, hear my prayer! Make my deceitful words to be their wound and stripe, for they have planned cruel things against your covenant and against your consecrated house and against the top of Zion and against the house possessed by your children. And cause your whole nation and tribe to know and understand that you are God, the God of all power and might and that there is no other who protects the people of Israel but you alone!”

As the deer longs for the water-brooks, *
so longs my soul for you, O God.

My soul is athirst for God, athirst for the living God; *
when shall I come to appear before the presence of God?

My tears have been my food day and night, *
while all day long they say to me,
“Where now is your God?”

I pour out my soul when I think on these things: *
how I went with the multitude and led them into the house of God,

With the voice of praise and thanksgiving, *
among those who keep holy-day.

Put your trust in God; *
for I will yet give thanks to him,
who is the help of my countenance, and my God.

For the love of Christ controls us, because we have concluded this: that one has died for all, therefore all have died; and he died for all, that those who live might no longer live for themselves but for him who for their sake died and was raised.

From now on, therefore, we regard no one according to the flesh. Even though we once regarded Christ according to the flesh, we regard him thus no longer. Therefore, if anyone is in Christ, he is a new creation. The old has passed away; behold, the new has come. All this is from God, who through Christ reconciled us to himself and gave us the ministry of reconciliation.

Because July 22 falls on a Sunday this year, the feast of St Mary Magdalene is transferred to July 23.