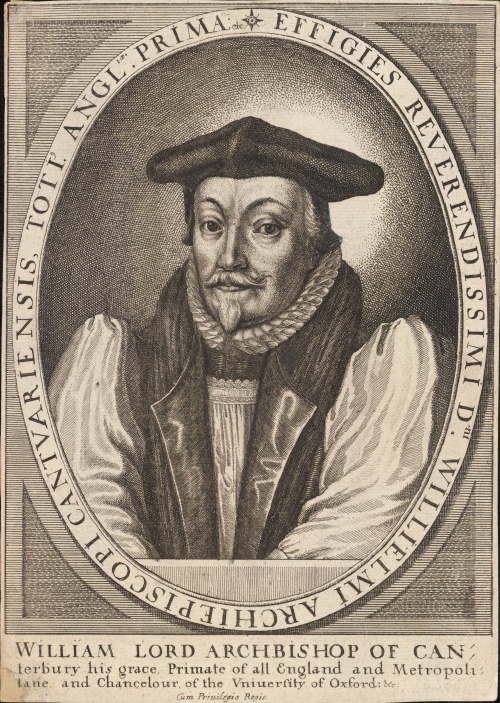 William Laud, born in 1573, became Archbishop of Canterbury in 1633, having been King Charles’ principal ecclesiastical adviser for several years before. He was the most prominent of a new generation of churchmen who disliked many of the ritual practices which had developed during the reign of Elizabeth the First (many of which began during the reign of her younger brother, Edward VI), and who were bitterly opposed by the Puritan party in the Church of England.

Laud believed the Church of England to be in direct continuity with the medieval Church, and he stressed the unity of the Church and State, exalting the role of the king as Supreme Governor of the Church. He emphasized the ministerial priesthood and the Sacraments, particularly the Eucharist, and caused consternation by insisting on the reverencing of the altar, returning it to its pre-Reformation position against the east wall of the church, and hedging it about with rails. (During Edward’s reign, and Elizabeth’s, altars had been removed, and simpler communion Tables set lengthwise – long axis oriented east-west – in the chancel of the church. Those who intended to take communion would move from the nave into the chancel at the offertory, and the priest or bishop would preside at the eucharist, standing on the north side of the Table.)

As head of the courts of High Commission and the Star Chamber, Laud persecuted Puritans and was abhorred for the harsh sentencing of some of the prominent members of the party. His identification with the unpopular policies of King Charles, his support of the Bishops’ War against Scotland in 1640 (triggered, in part, by Charles’ and Laud’s attempt to impose an English prayerbook on the Church of Scotland), and his efforts to make the Church independent of Parliament, made him widely disliked. He was impeached for treason by the Long Parliament in 1640, and finally beheaded on January 10, 1645.

Laud’s reputation remains controversial to this day. Honored as a martyr and condemned as an intolerant bigot, he was compassionate in his defense of the rights of the common people against the landowners. He was honest, devout, loyal to the king and to the rights and privileges of the Church of England. He tried to reform and protect the Church in accordance with his convictions – though these attempts at reform were marred by his treatment of those who strenuously disagreed with him theologically and liturgically. In many ways he was out of step with the views of the majority of his countrymen, especially in his espousal of royal Stuart views of the “Divine Rights of Kings”. The historian Nicholas Tyacke rates Laud as one of the greatest of the Archbishops of Canterbury, not giving him complete approval, but recognizing that his contribution to the future of the English Church was of major importance. Writing in the Church Quarterly Review in 1945, A.W. Ballard stated that

As far as doctrine was concerned Laud carried on the teaching of Cranmer and Hooker. He held that the basis of belief was the Bible, but that the Bible was to be interpreted by the tradition of the early Church, and that all doubtful points were to be subjected, not to heated arguments in the pulpits, but to sober discussion by learned men. His mind, in short, like those of the earlier English reformers, combined the Protestant reliance on the Scriptures with reverence for ancient tradition and with the critical spirit of the Ranascence.

He made a noble end, praying on the scaffold: “The Lord receive my soul, and have mercy on me, and bless this kingdom with peace and charity, that there may not be this effusion of Christian blood amongst them.”

The prayer for the Church on page 816 in the Book of Common Prayer (1979), added to the American Prayer Book in 1928, was written by Archbishop Laud.  It was first published in A Summarie of Devotions (1677), adapted from his manuscripts.  The original version of the prayer reads:

taken from Lesser Feasts and Fasts, with additions, including from
Fathers and Anglicans: The Limits of Orthodoxy (Arthur Middleton, Gracewing 2001) and Commentary on the American Prayer Book (Marion J. Hatchett, Harper San Francisco 1995)

Keep us, O Lord, constant in faith and zealous in witness, that, like your servant William Laud, we may live in your fear, die in your favor, and rest in your peace; for the sake of Jesus Christ your Son our Lord, who lives and reigns with you and the Holy Spirit, one God, for ever and ever. Amen.

The propers for William Laud, Archbishop of Canterbury, are published on the Lectionary Page website.